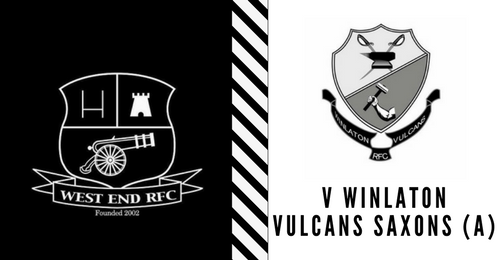 A wet and windy affair as West End took on Winlaton Vulcans Saxons at Axwell view.

The game kicked off with West running against the incline and wind. There were points on the board early doors after some early momentum was converted into 7 points as Drew (Joe) Rowan trundled over the line with McHugh adding the extras (0-7).

The second of the game came shortly after, when the ball was spun wide through the backline. Following good work from Stevenson, the chance was finished off by Shilling (filling in at No.8) who took up an excellent support line, crossing in the corner (0-12).

An initial flurry by West ended as the home team enjoyed a spell of good pressure, with a combination of ill-discipline and big carries (from a powerful pack) allowing them to camp in the half of the 'Men in Black'. After a sustained period, Winlaton were able to breach a strong defensive line, with their number 8 carrying over from the back of 5 metre scrum (7-12).

West hit back as the conditions worsened, with rain adding to the already adverse weather.  With the ball being secured through some good effort from the ‘big boys’, a deft chip over the top of the advancing defensive line, allowed Pritchard to fly hack the ball towards the try line, beating the winger to cross the whitewash (7-17).

With the half drawing to a close, a fourth try was added by Craig Allmond. When, a 10-12 switch inside of the opposition 22 from a quick penalty allowed him to dive over the try line giving West a healthy lead (7-24). The fiery first period finished with West forcing a turnover on their own 5 metre line, after withholding several attacking phases from the Vulcans.

The second half commenced with Big Ben (from Australia) and John (from Manchester) being replaced in the second row by Jordi (O’Neill) and Healy, with Seddon replacing Parkin in the front row. West added to their impressive first half display when Scottish International Matt Stevenson showed a clean pair of heels to get his first of the day, shortly after the break (7-29).

Stevenson then quickly added another one to his tally, when a rush defensive by inside backs put the Winlaton backline under pressure allowing the outside centre to intercept a mistimed pass in the middle of the park to race under the posts, no-one was catching him (7-36).

In a similar vein to the first half, Winlaton responded through some strong forward play after two initial West tries. With West conceding multiple penalties within their own 22 tempers flared, resulting in Matthew Allmond receiving 10 minutes in the bin for a flailing arm to an opposition player, despite many claims of innocence (mainly from himself).  Allmond Jr, was also on the receiving end of a telling off from the official after some choice expletives were expressed towards the Winlaton scrum half, just a slap on the wrist for him. The 14 men of the away team defended well on their own try line and survived this period without conceding, as territory was reclaimed through the boot.

West then re-asserted their dominance when at 60 minutes ‘Man of the Hour’ Stevenson claimed his hat-trick, latching onto the end of kick then showing some astute footballing skills (unlike the National team of his homeland) to dribble the ball through the posts touching down in the narrow dead-ball area (7-43).

West’s pressure continued as Winlaton struggled to get out of their own 22. After a spell of scrappy play, O’Neil was able to charge down an attempted clearance from the home team, with Jack Rowan acting first to flop onto the spewed ball by the touchline of the try area. Unfortunately, the additional points were not added as McHugh pulled a difficult kick in difficult circumstances wide of the posts (7-48).

The final score of the afternoon came again from Stevenson, as 3 tries just wasn’t enough. With a 10-12 switch creating space outside, the speedster broke through a gap in the Vulcans back line and powered towards the line to finish off an impressive outing (7-53).

The game ended with West producing a dominating performance winning 53-7 making it 3 out of 3 in the league. Congratulations to Matt Stevenson on an impressive display winning the Convergys Man of the Match. Thanks to Winlaton for hosting the game and all the spectators who made the effort to watch despite the weather. West play Berwick in another league game at St Cuthberts next week (28/10/17 3pm).